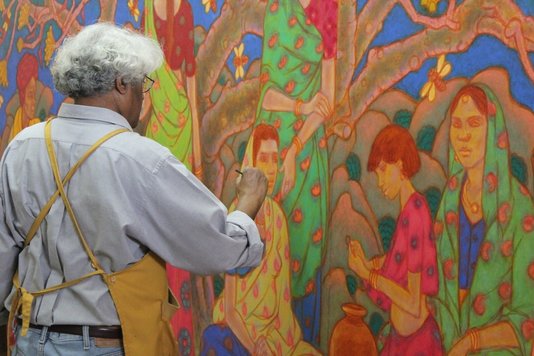 Born in the southern Indian state of Kerala in 1935, Ramachandran received a Master's degree in Malayalam literature from Kerala University in 1957. He joined Kala Bhavana at Viswa Bharati University (founded by Nobel Laureate Rabindranath Tagore in Santiniketan, West Bengal ) to study art under masters like Ramkinkar Baij and Benodebehari Mukherjee. The cultural and intellectual milieu of Santiniketan drew him closer to the art traditions of India and other eastern civilizations and began his lifelong research on mural paintings of Kerala temples. He joined Jamia Millia University at New Delhi as a lecturer in art education in 1965. He continued to work here for the next twenty eight years as a Professor and Head developing the department. It has become an important art department of India.

He took voluntary retirement from teaching in 1992 to devote all his time to his creative pursuits. His first solo exhibition was at Kumar Gallery, New Delhi in 1966. Since then, he has held more than thirty two large solo exhibitions of paintings, sculptures, water-colors, graphics and drawings in major Indian cities. These include two retrospective exhibitions in 1978 ( New Delhi ) and 1983 (Mumbai). In 2003, the National Gallery of Modern Art (New Delhi) honored the artist by organizing a major retrospective of his works executed during the last four decades or so. A comprehensive two-volume book documenting and analyzing his works was also released. He has represented Indian contemporary art in many significant group exhibitions in India and elsewhere, namely, Indian Triennales I, II, III and V (New Delhi), Contemporary Indian Painting', Japan -1970, Brazil and Venezuela-1971, USA-1973, Yugoslavia, Poland, Bulgaria and Belgium-1974), Menton Biennale (France-1974) and 'Festival of India' exhibitions (London and Oxford-1982, Switzerland-1987). He received the National Award for painting (1969 and 1972) , Noma Award from Japan for children's picture book illustrations (1978 and 1980). In 1991, he was conferred with the Parishad Samman from Sahitya Kala Parishad.

In 2000, Viswa Bharati University bestowed the Gagan Abani Award on him. In 2002, he was elected as a Fellow of the Lalit Kala Academi. In 2003, the Government of Kerala honored him with the Raja Ravi Varma award. In 2005, he was decorated with the Padma Bhushan award, one of the highest civilian honors granted by the Indian state for outstanding achievement. In the same year, he was made Professor Emeritus by Jamia Millia Islamia university. The artist has written and illustrated nearly 50 children's picture books that have been published in India, Japan, England and USA. He has designed several stamps for the Department of Post & Telegraph of the Government of India. He executed several large-scale murals including those for Gandhi Darshan (1969) and Maurya Sheraton hotel (1976). In 2003, he completed the monumental granite bas-relief sculpture (125 ft X 19.5 ft) at Rajiv Gandhi Memorial at Sriperumbudur near Chennai, Tamilnadu.

In 2013, Mahatma Gandhi University (Kottayam, Kerala) honoured him with a D. Litt.

In 2018, he was awarded the ‘Kalidas Samman’ by Bharat Bhavan, Madhya Pradesh government.

Titled ‘Ekalinji Fantasy’, a major exhibition covering fifty-six years of drawings, sketches and studies along with recent paintings  and sculptures was displayed in the entire Rabindra Bhawan, New Delhi in late 2014. The show was curated by Ranesh Ray. A two-volume book, ‘A. Ramachandran: Life and Art in Lines’, edited by Prof. R. Sivakumar, and containing an autobiographical essay by the artist was released at this occasion.
​
Ramachandran lives and works in New Delhi.