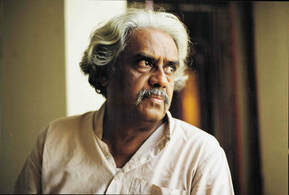 A Ramachandran is one of India's most distinguished and prolific artists who has ceaselessly experimented with visual language for more than five decades. His art is uniquely both contemporary and Indian in essence. Painter, sculptor, graphic artist, designer and art educationist, Ramachandran has explored diverse mediums and scales with a dynamic personal vision and distinctive artistic style.
Copyright Statement: ​The images contained on this, and any other site under the artoframachandran.com domain, are the property of A. Ramachandran and are protected by International copyright laws
In stark contrast to the dark, tortured images of his older works, the latter half of his artistic journey has gradually shifted to a lyrical engagement with life and nature. The faceless, twisted male bodies were, to begin with, replaced by rustic, faceless female figures.  Then, faces appeared and were combined with sensuous yet stylized human and natural forms in the epic painting Yayati. His more recent works celebrate nature and life in its myriad and multifarious forms.
​
While a continuous preoccupation with forms and images along with experimentation with various techniques and mediums has wrought this transformation, frequent trips to the remote tribal villages in Rajasthan and study of Rajasthani miniature traditions have further redefined and reformed Ramachandranís visual language. Several aspects of Indian classical art have been integrated into his art, including compound motifs and imagery, decorative elements along with the exuberance of forms and colors. Ordinary tribal folk and the natural landscape that he continues to sketch in Rajasthan have been woven into the iconography of Indian classical art employed in his works. These integrative aspects also appear strongly in his recent life-sized bronze sculptures, richly encrusted with flora and fauna motifs.
Equally at ease with mural paintings on a very large scale and the intimacy of miniature paintings, Ramachandran has executed thousands of drawings in pen and ink.  Likewise, the numerous water-colors that he has created by adding the many layers of thin washes of color match his large canvases in terms of diversity of colors, complexity of composition, and sensitive rendition of forms and images.

Ramachandran taught art for three decades, has written and lectured on art, and also designed stamps and ceramics. He has written and illustrated numerous picture books for children which have been highly acclaimed. Some of the original illustrations for these books are on permanent display at the Museum of Childrenís Books at Miyazaki, Japan.

Still inspired by the natural environs and people of rural areas outside Udaipur in Rajasthan and saddened by its gradual disappearance, Ramachandran continues to create an imaginary universe that bestows them the beauty, pristineness, and permanence he wishes for them.